"If you want some magic, look with your heart"

This has been my tenth trip to Chiang Mai (Thailand).

During the first few visits I explored most of the streets and lanes within the old city surrounded by the moat. Afterwards I was happy to “settle down” as the main focus of my holidays took on the theme of a “full body service”. This translates to healthy food, massage, reflexology and catching up on reading. I await the day when I will grab the last unread book from my home library. French champagne definitely! 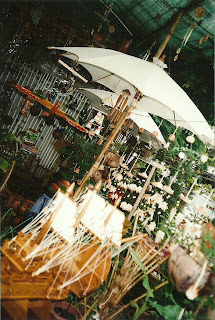 Going back to the story ...
During my recent holiday, instead of taking my usual route to the printer I slightly deviated and stumbled on something very special. 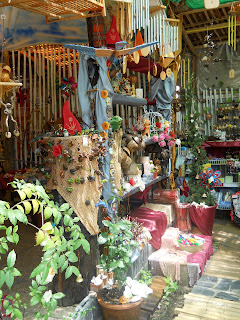 It was a shop set up under the canopy of green canvas with matching walls, filled with a variety of colourful little knick-knacks and intermingling sounds from many different wind chimes.

As I got closer, I could sense this welcoming and playful energy calling me in. Then suddenly, I felt like a little child full of excitement as if someone has cast a spell on me!
Now, all I could see was a treasure cave. A secret place. 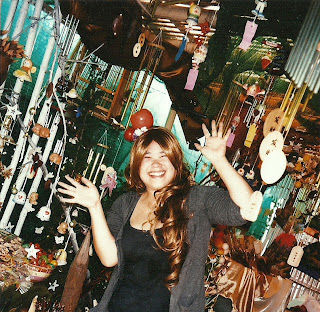 Upon entering, I was greeted by the girl with a lovely smile. She was wearing a head band decorated with two red apples of reasonable size, which looked great with her long wavy hair. Her free spirited energy felt familiar, but I could not put my finger on it until much later.

She asked me to wait while she brought me a drink, and before I could say anything she disappeared into the adjoining house.

A moment later she reappeared with a cup of cold drink in one hand and a piece of lime in the other. In a story telling way she said to me that if I squeeze some lime into my drink its colour will change. I followed her instructions expecting to see my light blue drink turning green, but to my surprise it became a beautiful indigo. Wow!
When I asked about the secret ingredient my drink was made of, she pointed to the bell shaped indigo blue flowers on the vine next to us.

While sipping my mystery drink and twirling around the shop with eyes wide open, a young couple stepped in unaware of the upcoming magic. I decided to get a little bit closer to share their excitement. Unlike me, they were a bit unsure about the drink, but following my reassurance the lime got squeezed and the indigo colour appeared in its full glory once again. 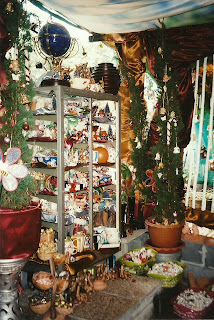 The “Classic Summer House” shop is not that big, but because it has so many little things it takes a bit of time to see it all. In the centre, there is a smaller square area (with its own silk canopy) where you will find shelves filled with little figurines, tea pots and tea cups as well as other tiny treasures. The eclectic content of the shop definitely adds to its uniqueness.

As I was equipped only with my film camera at the time, I decided to revisit the treasure cave a couple of days later with a recently gifted to me digital technology.
My feeling about the place had not changed, but my drink had! This time it was a non alcoholic banana “Baileys Cream” on ice.

In a “happy hour” mood I started taking some photos and as I got closer to the indigo flower vine to capture a secret ingredient of the magical drink, I couldn't see any left. They were all gone. 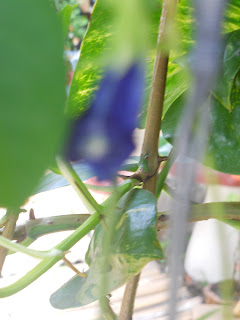 On hearing my disappointment, my lovely hostess took me to the vine closer to the house to show me the last flower. As she gently lifted a leave, she pointed to the indigo bud while saying: “But it is still asleep.” Ooo ... so sweet!

As I finished taking the photos and a video clip with permission for the blog story, a couple in their late 20's walked in. They seemed even more unsure about the drink than the couple on my first visit. To my surprise, their level of excitement about the place was rather low compared with mine, so I may have appeared to them a little bit on a crazy side especially at my age.

At this point I realised that they did not see and feel what I did. 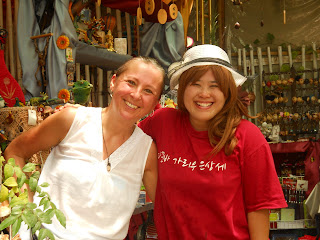 Looking through my inner child's eyes, I have transformed the “Classic Summer House” to a treasure cave and my lovely hostess to a ... (can you guess?) Fairy God Mother!

I don't know where my 49 year old self was at the time, but my 4 year old was definitely having a great time. A time of care free joy!

Thanks to a generous support of August winds, the sound of the wind chime that was wrapped with greatest care for safe travelling frequently remind me of this special encounter.

Something to ponder on ...

As a gardener we have freedom to create a beautiful space as long as we are prepared to do some regular weeding. This can definitely be very challenging at times as some roots can be very deep or generously spread out. To clear all the weeds in one life time is pretty much impossible. However, this should not hold us back from attempting to release at least some of the feelings that prevent us from seeing something special in every moment of our lives. 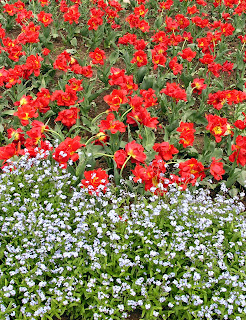 With each weed removed we create more space for the seeds of loving energy to sprout, followed by the blooms of happy moments. 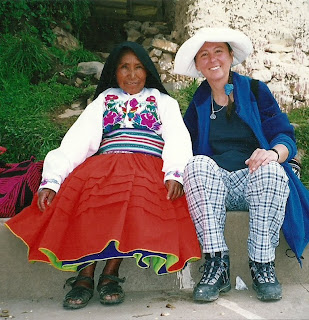